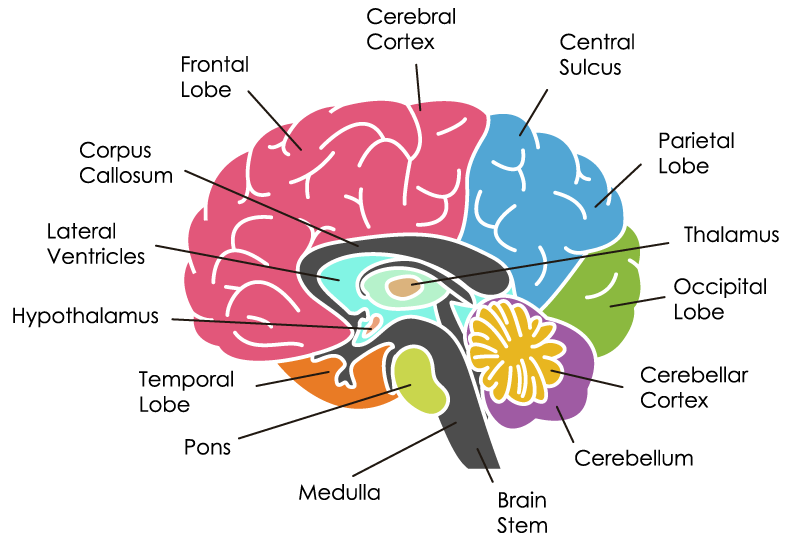 The frontal lobe is the largest area of the brain. It is primarily responsible for the planning and execution of actions as well as inhibition.

The primary motor cortex controls the majority of movement. The left side of the brain controls movement for the right side of the body, and vice-versa. The main crossing location of these motor fibers occurs in the brainstem.

The medial prefrontal cortex, orbitofrontal area, and the medial frontal area are responsible for motivation and social information processing and regulating emotions, behavior, and personality.

Cortex means "bark" in Latin and appropriately the cerebral cortex is the outermost layer of the brain, made up primarily of grey matter. It is the most prominent visible feature of the human brain, and although it is only a few millimeters thick, it comprises about half of the weight of the brain.

The cerebral cortex forms extensive connections and is involved in multitudinous brain functions. As a means of simplification, the cerebral cortex is often characterized as being made up of three types of areas: sensory, motor, and association areas.

The central sulcus is a prominent landmark of the brain, separating the parietal lobe from the frontal lobe

A large portion of the parietal lobe is dedicated to sensation. The primary somatosensory cortex receives sensory input from the opposite side of the body. The parietal lobe also contains areas responsible for the dorsal or "where" pathway of visual processing and spatial orientation.

The thalamus is a large, symmetrical (meaning there is one in each cerebral hemisphere) structure that makes up most of the mass of the diencephalon. A large number of pathways travel through the thalamus, including all of the sensory pathways other than those devoted to olfaction (smell).

The thalamus is often described as a relay station. This is because almost all sensory information (with the exception of smell) that proceeds to the cortex first stops in the thalamus before being sent on to its destination. For example, visual information from your retina travels to the lateral geniculate nucleus of the thalamus, which is specialized to handle visual information, before being sent on to the primary visual cortex (the main area for visual processing in the brain).

The occipital lobe is dedicated to vision. It receives information from the lateral geniculate nucleus of the thalamus, and aids in the processing of visual information. The primary visual cortex is contained in the occipital lobe.

The cerebellum is hard to miss when you're looking at a brain. Cerebellum is Latin for "little brain", and indeed the cerebellum looks a bit like a smaller version of our brain. It protrudes from the back and bottom of the cerebral cortex.

It is best known for its part in the modulation of movement. When we make a voluntary movement, the signal to initiate that movement originates in the motor cortices. Before the signal is sent to our muscles, however, it is sent to the cerebellum.

The spinal cord enters the skull through an opening known as the foramen magnum. At about this point, the cord merges with the medulla oblongata, which is the lowest part of the brainstem. The brainstem is thus the stalk that extends from the brain to meet the spinal cord, and is clearly visible when looking at the brain from any perspective that allows the base of the brain to be seen. The brainstem is made up of 3 major structures: the medulla oblongata (usually just called the medulla), the pons, and the midbrain.

In addition to connecting the brain to the rest of the nervous system, the brainstem has a number of essential functions. To simplify things, I'll discuss some of the functions associated with each of the three major regions of the brainstem. It should be noted, however, that the organization of the brainstem is very complex and this is just an overview.

In addition to being the point where the brainstem connects to the spinal cord, the medulla contains a nucleus called the nucleus of the solitary tract that is crucial for our survival. The nucleus of the solitary tract receives information about blood flow, along with information about levels of oxygen and carbon dioxide in the blood, from the heart and major blood vessels

The next structure on our way up the brainstem is the pons. The pons is hard to miss; it is a large, rounded, and bulging structure just above the medulla. The word "pons" means bridge in Latin, and it resembles a rounded bridge that connects the medulla and the midbrain.

Motor commands dealing with eye movement, chewing, and facial expressions also originate in the pons. Additionally, cranial nerve nuclei in the pons are involved in a number of other functions, including swallowing, tear production, hearing, and maintaining balance/equilibrium.

The temporal lobe contains critical areas that process and retain visual and auditory information. The primary auditory cortex is contained here, as is Wernicke's area which is critical for language comprehension. The temporal lobe is also responsible for the ventral or "what" pathway of visual processing.

The limbic system is composed of the hypothalamus, amygdala, thalamus, basal ganglia, and hippocampus. This is the "emotional" brain and contributes to memory formation and storage, as well as regulation of hormones.

The hypothalamus is a small (about the size of an almond) region located directly above the brainstem. It is buried deep within the brain and not visible without dissecting the brain.

Many of the important roles of the hypothalamus involve what are known as the two H's: Homeostasis and Hormones.

The ventricles are four interconnected cavities distributed throughout the brain that produce and contain cerebrospinal fluid (CSF).

The ventricles are lined with a specialized membrane called the choroid plexus, which is made up of ependymal cells. Ependymal cells are glial cells tailored to produce CSF, and they secrete the fluid into the ventricles at a relatively constant rate

To understand the role of the corpus callosum, it is first important to remember that the brain is divided into two cerebral hemispheres (right and left). The hemispheres are made distinct from one another by a long groove called the medial longitudinal fissure. On a large scale, the two hemispheres are nearly identical, but on a microscopic and functional level there are some differences.

When information like sensory data is sent to the brain it is typically received first in one hemisphere. For example, when you type on your keyboard, information about the feel of the keys is sent up from your right hand to the primary somatosensory cortex on the left side of your brain. That information, however, must then be shared with the right side of your brain as well. That's where the corpus callosum comes into play. It is a large bundle of fibers that connects the left and right hemispheres, and it carries information received in one hemisphere over to the other.

Over 476 Vivid Vision Providers prescribe virtual reality alongside patching and vision therapy to treat your lazy eye. Sign up through our doctor locator to see if Vivid Vision is right for you.