Exophoria is defined as an outward deviation of the eyes. The best way to think of exophoria is under convergence - the eyes don't want to perfectly point in the same direction. The result of an outward eye (phoric) posture is that the eyes and brain must constantly coordinate to rotate and move the eyes to a straight-ahead position. If eye teaming and coordination is lost, the eyes move outward and out of alignment and a person sees double. Doubled images are often horizontal if no additional vertical phoria is present. When a patient's ability to fuse and maintain single vision is lost and vision is doubled, the condition is termed a tropia or visible eye turn.

Eye positioning is tested using a cover test. A clinician covers one eye at a time, and then alternates between the eyes to disrupt fusion and watch how the eyes react. When fusion is broken (by moving a hand or cover paddle from one eye to the next), the eyes assume a position of rest, called the phoric or tropic posture. This position may be: 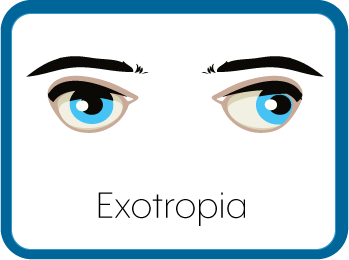 So exoTROPIA is a visible outward deviation of one or both eyes and exoPHORIA is only visible when testing eye position and breaking fusion.

The lines can get a bit blurred here - a phoria can break down into a tropia. This means that a patient is able to keep both eyes teamed together, but at times one eye deviates. This is a common cause of double vision and is termed an intermittent tropia since it doesn't always occur. During a vision exam and eye specialist may repeat eye position testing at different distances, in different positions of gaze, or with different targets to see if the patient's phoria breaks down and becomes an intermittent tropia. In fact, most exoTROPIA is just that - intermittent. Intermittent exotropia makes up about 50-90% of the cases of exotropia.

The underlying cause of exophoria isn't clearly known. However, the primary issue of exophoria is a weakness in the eye muscles. This muscle weakness causes difficulty in what is called eye-teaming, or the ability to get the eyes to work together. This generally happens in childhood.

In short, it's not completely clear what the exact cause for exophoria is. The most common thought is that exophoria is due to a combination of anatomical, mechanical, and innervation factors. Anatomical may be eye position, orbit size and shape, eye size, tissue/fat within the orbit, etc. Mechanical refers to action of the extraocular muscles. Innervation refers to the neural impulses that guide eye movement. The end result is an abnormal balance between convergence and divergence.

Exophoria is often associated with convergence insufficiency. The symptoms are quite similar:

Anything that forces the eyes to converge can make the symptoms of exophoria worse, so these symptoms are often noticed when reading or other near work. If you're experiencing any of these symptoms, it may be time for an eye examination.

Treatment of Exophoria (and Intermittent Exotropia)

The ultimate goal of treatment of exophoria (and convergence insufficiency and other conditions related to exophoria) is to improve the patient's ability to maintain fusion when converging and diverging.

Treatment for exophoria can vary based on the severity of the symptoms. Some of the treatment options for exophoria may include the following:

Corrective lenses. These may or may not include the use of prisms. Eye exercises. One such exercise is the pencil pushup.

Glasses may have some effect on a patient's eye position, especially if there is a high glasses prescription or a significant imbalance between the two eyes. Correction of a significant refractive error (need for glasses) is often the very first step of treatment for any binocular vision disorder, though, in the case of exophoria, it doesn't always solve the problem.

Vision therapy is often very effective in improving fusion (or fusional range). The goal of therapy is to help a patient learn to team both eyes together quickly and efficiently. Vision therapy for exophoria has a similar appearance for esophoria, but the key focus is working on convergence. This is done through a series of guided tasks or exercises that work on critical skills such as recognition of poor eye coordination, improving convergence ability, improving divergence ability, and improving the ability to rapidly change between convergence and divergence.

Numerous tools may be used to help train these skills, such as computer or virtual reality games, vectograms, lens/prism flippers, and a Brock string. Active vision therapy done under the supervision of an eye care provider has been shown to produce better results than simple convergence activities at home (called pencil push-ups).

Quite often prisms are not as effective for exophoria, though some patients may benefit from prismatic lenses. Prisms are often oriented in a base-in direction, which decreases the convergence demand placed on a patient's visual system. The problem with prism is that often prism lenses act as a temporary solution to a larger problem - the patient still has poor convergence ability.