There are many different visual skills your brain learns in order to navigate the world. The College of Optometrists in Vision Development (COVD) has outlined the 17 visual skills necessary for performing daily tasks like reading, learning, and navigating the world. Wendy Beth Rosen, in her book titled The Hidden Link Between Vision and Learning, outlines 22 visual skills that impact our daily lives. Seeing clearly (acuity), "20/20", is just one of these skills. Most standard vision screenings do not test all of these visual skills; therefore, problems in these areas go undetected and can take an unnecessary toll on children in the classroom. 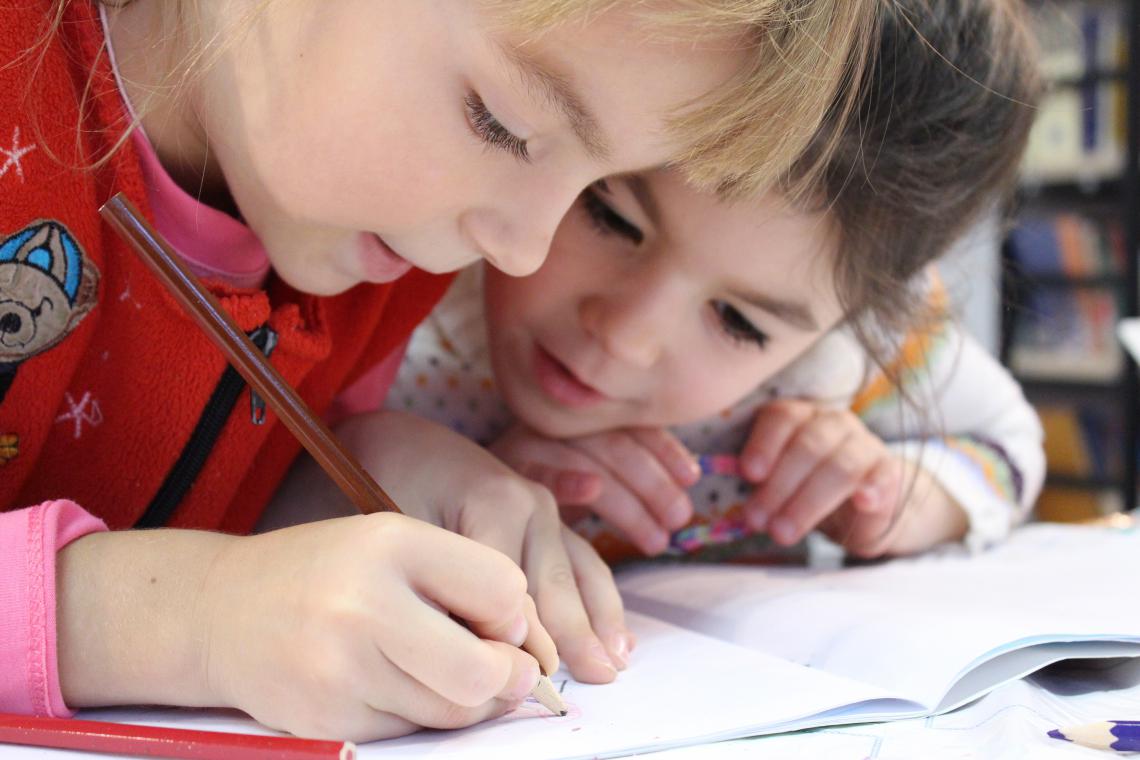 Eye Movement Control is also known as oculomotility. It is the ability to move both eyes together to point at an intended target or follow along a path. It gives us the ability to read a line of print, track moving targets such as a ball, and adjust focus between near and far distances smoothly and efficiently. This skill is crucial in the classroom where information is delivered from multiple sources at varying distances to the students.

When the eyes are not teaming together, this can result in blurred vision, moving print, problems with depth perception, and double vision. This can cause confusion, difficulty concentrating, eyestrain, and frustration. This can manifest into behavior problems. People with eye teaming problems may have difficulty maintaining eye contact, lose their place when reading, have poor handwriting, be generally uncoordinated and have a hard time with activities like riding a bike, playing sports, etc.

Another thing that happens is the brain will sometimes disregard some of the information as an attempt to make sense of the information coming in. This is an adaptation and is called suppression. This too can cause confusion. Problems with eye teaming can lead to what is known as lazy eye (amblyopia).

Vergence is the ability to move our eyes together to focus on a certain point.

The inward movement of the eyes to focus on an object at a close distance is called convergence. We depend on this visual skill, in conjunction with other visual skills, to adjust to near-work activities such as desk work at school, working on a smartphone type device, or even in sports when catching a ball.

Outward movement of the eyes while looking at things in the distance is called divergence. We depend on this skill, in conjunction with other visual skills, for distance activities such as reading the board at school, driving, navigating rooms, and watching TV.

Focus Accommodation is the capacity to efficiently and quickly adjust focus from near to far distances. An example is when a student reads text on a board at the front of the classroom and then back to their computer or notebook to take down notes. This should happen effortlessly and we should be able to sustain focus at distance and at near for extended periods of time.

Depth Perception is the ability to tell that things are further away or closer in relation to other objects. Deficiencies in the ability to perceive depth can cause people to seem clumsy in sports as well as in everyday activities like driving a car, reaching out to grab objects, etc.

Peripheral Vision allows you to see what's on either side of you while your eyes are pointed forward and without moving your head. We are able to see directly in front of us while also taking in information about what is around us -- including above and below eye level. This helps us move through space smoothly and confidently. It also helps us keep our place when we read a line of text. If your Peripheral Vision is not functioning properly you may only be able to focus on a single word, or just a couple words, at a time. This can impact reading efficiency among other things.

Visual Motor Integration involves the ability to coordinate your bodily movements with the information coming in visually. These skills are often referred to as "Eye-Hand Coordination". Information is transmitted to and processed by the brain. The brain signals our muscles to move, based on the visual information it received, in order to perform appropriate actions necessary to complete tasks-- like grasping a cup and bringing it to our mouth to drink, putting one foot in front of the other to walk or run, or moving a pencil in certain directions on a piece of paper.

Gross-motor coordination relates to your ability to integrate visual information in order to move through space accurately and comfortably. It generally refers to the use of larger muscle groups and larger movements. Examples include kicking a ball, shooting a basketball, lifting or relocating objects, etc. People who struggle with gross-motor coordination may appear clumsy or uncoordinated. They may have trouble riding a bike, playing sports, and avoiding obstacles.

Fine-motor coordination relates to your ability to integrate visual information in order to perform smaller, generally close-up activities with accuracy and comfort. Examples include writing, drawing, cutting with scissors, buttoning a shirt, etc. People who struggle with fine-motor skills may exhibit frustration or irritability when trying to perform such tasks.

Visual Spatial Skills is a broad term encompassing the various abilities that enable us to understand where we (and things) are in space and to organize and navigate through that space. Visual-spatial skills are important for success in solving many tasks in everyday life. Examples include understanding and being able to use a map, merging a car onto a highway, packing a suitcase or backpack, and combing your hair while looking in a mirror.

Laterality is the awareness that there are two different sides to the body (right and left). Directionality is the understanding of up, down, in front, behind, and combinations of these. This skill helps in decoding letters and eventually reading. People with problems in these areas may confuse their right and left, up and down, or front and back.

Is the ability to understand directional concepts that organize external visual space. A visual spacial deficit may contribute to poor athletic performance, challenges with rhythm, lack coordination and balance, letter reversals such as b and d's. There is also a tendency to work with one side of the body compared to using laterality or both sides.

Like visual-spatial relations to organize visual space, the orientation of these visual items plays a role in visual-spatial skills. The most common cause of reversals among older children is the lack of visual-spatial development or not knowing their relationship to their own bodies or in the real world around them.

Visual Memory is the ability to readily recall characteristics of visually presented material. Dysfunctions in visual memory may cause prolonged time in copying assignments, difficulty recognizing the same word on the next page, and difficulty retaining what is seen or heard.

Visual Sequential Memory is the ability to remember symbols or characters in the order in which they were seen. We often use static pictures to assess vision, but our everyday vision is a constant progression of dynamic scenes through time. Being able to remember how these scenes flow together allows us to navigate to a destination as we anticipate each succeeding landmark, follow instructions by matching images of actions to sequences of words, and even organize the sequence of letters that will spell a word.

Very simply, visualization is creating a picture or image in our mind. For example, when reading a book you may develop a mental image of what a character or a scene looks like. For some it may be more helpful to think of visualization as the simulation of the intended consequences of looking. Visualization is a visual skill that helps us with following directions, reading comprehension, handwriting, math skills, and much more. Difficulties with visualization can lead to poor spelling, poor recall of information, difficulty with remembering a sequence of directions, poor reading comprehension and difficulty with writing.

Figure-ground perception is the ability to differentiate an object from its background. We use this skill when we scan text to find specific information or when we're looking for something among other objects. "I Spy" books are an example of scenes that require this visual processing skill. People who have difficulty with figure-ground perception may have trouble with hidden picture games, may have trouble copying notes in class, and may become overwhelmed by excessive text on a page.

Visual closure is the ability to visualize a complete image even if only some information is provided about the whole image. This skill enables us to read efficiently-- we don't have to actually focus on each individual letter of a word to know what the word is. People who have trouble with this visual processing skill may need to sound out words, they may be slow readers, they may easily confuse words with similar letters at the beginning or end, they may have trouble with jigsaw puzzles.

Visual form recognition, also called visual form discrimination, is the ability to identify similarities and differences between various objects or images. This is an important skill in reading and working with numbers but it also impacts us in social situations and with decision making. It helps us recognize patterns-- whether that's among text on a page or in behavior patterns among our peers.

Visual form constancy is the ability to identify or sort objects, shapes, symbols, letters, and/or words, despite differences in size or position. With form constancy, the form is constant but the orientation changes. It helps us recognize that the letter "b" makes the same sound whether it's uppercase or lowercase. It helps us distinguish the letter "o" from the letter "a". Someone who has difficulty with this skill may have trouble with letters or words presented in different fonts or when written in cursive, they may have trouble distinguishing the difference between similar shapes like ovals or circles, they may not recognize familiar objects when seen in a photograph, they may have trouble with puzzles, etc. These difficulties can impact reading, studying, note-taking, and overall may impede their learning.

20/20 vision is a term used to express normal visual acuity measured at a distance of 20 feet. If you have 20/20 vision, you can see clearly at 20 feet what should normally be seen at that distance. If you have 20/100 vision, it means that you must be as close as 20 feet to see what a person with normal vision can see at 100 feet.

Although visual acuity testing is very useful to determine the relative clarity of your eyesight in standardized conditions, it isn't predictive of the quality of your vision in all situations. For example, it can't predict how well you see objects that are similar in brightness to their background, colored objects, or moving objects. It also ignores other important vision skills, including peripheral awareness, eye coordination, depth perception, focusing ability, and color vision.

Facts about Vision and Learning

According to the American Optometric Association (AOA), up to 80% of a child's learning in school takes place through vision. Most of this learning takes place at a close distance such as on computers, at a desk, or on a tablet or other hand-held device.

It is estimated that one out of 10 children has a vision problem significant enough to impact learning. This equates to 5 million children in the United States alone.

The Hidden Link Between Vision and Learning: Why Millions of Learning-Disabled Children are Misdiagnosed by Wendy Beth Rosen

Eye coordination problems can be mistaken for ADHD:

Sterner B, Abrahamsson M, Sjostrom A. The effects of accommodative facility training on a group of children with impaired relative accommodation--a comparison between dioptric treatment and sham treatment. Ophthalmic & physiological optics : the journal of the British College of Ophthalmic Opticians (Optometrists). 2001;21(6):470-6. http://www.ncbi.nlm.nih.gov/pubmed/11727875

Over 476 Vivid Vision Providers prescribe virtual reality alongside patching and vision therapy to treat your lazy eye. Sign up through our doctor locator to see if Vivid Vision is right for you.