An eye exam can be confusing. A clinician often performs a number of vision tests on a patient with suspected amblyopia (lazy eye) or other binocular vision disorders. What are these tests for? In short, a thorough vision exam may help elicit the areas where a patient is struggling and also help determine the best treatment options for the condition in question. 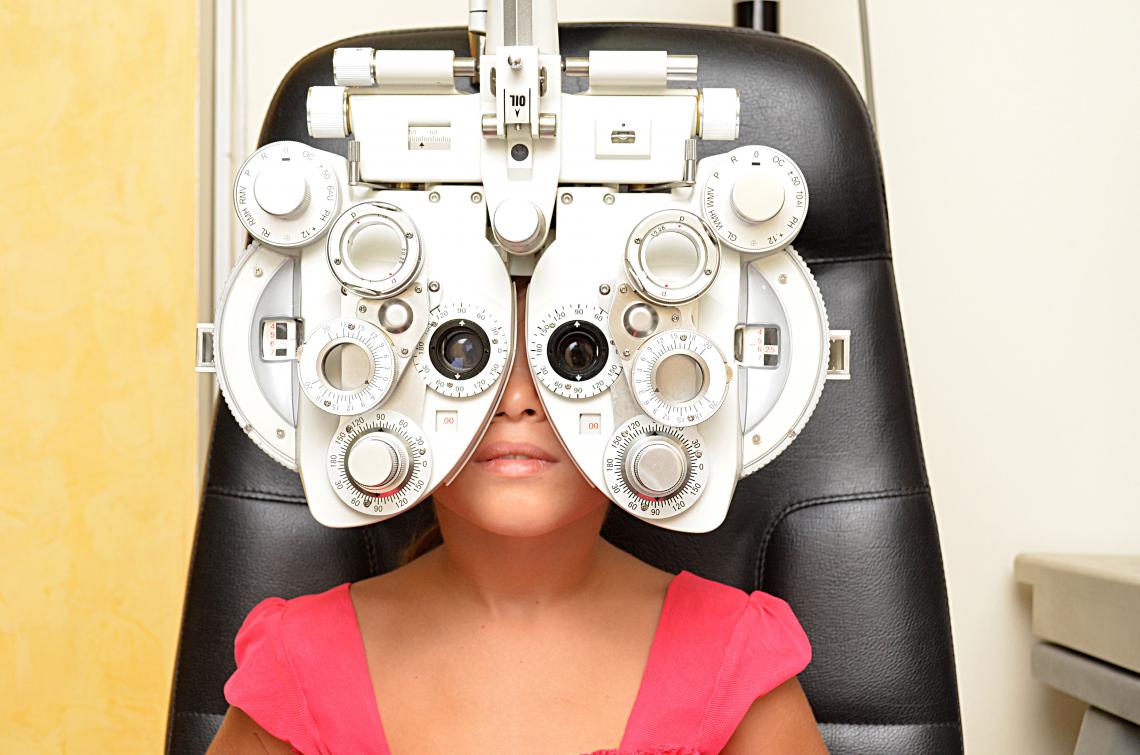 These tests look at specific binocular visual skills. Think of these as evaluation of different aspects of binocular vision.

This is actually one of the most important tests in a vision exam, as is probably the one test most patients associate with an eye examination. This is the "glasses test" or the "1 or 2 test" where the clinician uses an instrument called a phoropter to change lenses and evaluate the best optical correction for a patient.

The four dot test uses red-green glasses and a flashlight or other light source with red, green, and a single white dot filter on it. The patient fixates on the light and reports the total number of lights or shapes seen.

Striated lenses are special lenses with no power or correct in them. Instead, these lenses have small lines (striations) that run at 45 degrees and parallel in one eye and 135 degrees and parallel in the other eye. The clinician uses a penlight and asks the patient to look directly at the light. The result for the patient is the projection of an X pattern of light (normal vision) or missing lines or pieces of a line missing (example / seen if suppression one eye or \ seen if suppression the other).

A small prism is briefly held in front of one eye, which moves the image of a light or object the patient is fixating on slightly away from central vision. If this movement is noticed by the vision system, a quick, small eye movement occurs. However, if one eye is suppressing, the small image movement goes unnoticed, and the eyes will not make an adjustment. This quick suppression test is helpful for detecting small eye turns (called microtropia).

The patient holds a string with different colored beads attached to it up to his nose. When focused on different beads, the patient should notice the string forms an X or V (depending on where the beads are on the string). This is using the concept of physiological diplopia - the string should appear doubled, but if a patient is suppressing, only one part of the string is seen.

The cover test is an evaluation of the patient's eye position. The clinician moves a paddle or similar object between the two eyes to disrupt fusion and observes how the eye move. This is often repeated a number of times at distance and near, and sometimes with the patient holding their head in a different position. Often the measurement phase of this test involves seeing how the eyes move with different magnitudes and values of prism lenses. Sometimes this test is repeated with different powers of lenses to see how a patient's eye alignment changes with different glasses lens powers.

Pursuits and saccades are fine eye movements that are used constantly throughout the day and are critical for reading and tracking. Saccades are jumping eye movements, so to test the saccadic system, the patient may be asked to quickly switch gaze between two targets. This is a simple observational test where the accuracy of the patient's saccadic movements are evaluated during testing. More formal or standardized psychometric tests such as the Developmental Eye Movement (DEM) test or King-Devick Test use a set of seeming randomly spaced numbers that challenge a patient's ability to make quick saccadic eye movements. These scores are standardized and allow comparison to a set of normative values.

Pursuits are slower tracking eye movements. These can be quickly tested by asking the patient to follow a slowly moving target. Again an observational test, the patient's ability to maintain fixation on the target is evaluated during testing.

Lens flippers contain a pair of (+) and (-) lenses on each side, which relax or stimulate the focusing system of the eyes, respectively. This quick change back and forth assess the patient's ability to quickly shift focus.

Similar to lens flippers, occasionally the clinician will use a distance chart and a near chart and ask the patient to quickly switch focus between the two.

These tests can be done in two ways. The near point of accommodation tests asks the patient to move a target (usually a small set of letters) from far away (arm's length out) up to the point that the letters become blurry. The near point of convergence is similar but asks the patient to perform a similar action but report with the targets goes double.

Fusion refers to the ability of a patient to main fusion - a single, image - under different stressors. Fusion does rely on a mix of the previous topics - eye movement and accommodation. The eyes must be able to move and alter focus in order to keep an image clear and single. Often the stressor used when testing fusion is an alteration of a prism, which forces the patient to make an adjustment to eye posture when the prismatic lenses are changed.

These tests can be done behind the fancy lens instrument (phoropter) common in an eye exam, or done using a set of prisms in free space. In both methods, prisms force convergence or divergence (horizontal) or supravergence or infravergence (vertical) corrective eye movements in order to keep an image single. The amount and direction of prism a patient is able to tolerate until reporting the target breaks into two images are then compared to a set of normative values.

Functional tests of reading speed, visual processing skills, eye-hand coordination, balance, and other skills involving the visual system may be used during an exam to further evaluate the visual abilities of the patient.