Vivid Vision Spotlights are a series of talks and conversations with experts and patients standing at the vanguard of vision science.We probe deep into their stories and experiences using Vivid Vision, living with vision ailments and more. Amina Stanbridge is a vision therapist at the Hope clinic in Tacoma, Washington working under the direction of Theodore Kadet.  We are grateful she was able lend us a few minutes of her time. Here are some highlights of our conversation (you can access to our full discussion via this link).

She was saying, "Wow something is happening, they're getting closer (the objects in the software), they seem like they're more clear, they're easier to see." And once the images fused together, she literally sat back in her chair because she couldn't handle how '3D' it was. She was almost in tears, she was saying "this is the first time I've ever seen in 3D."

Cris: What has been your experience with Vivid Vision in patients with Amblyopia thus far?

Amina: So with my Amblyopic patients, I have a few that have been using Vivid Vision and the one thing that is pretty remarkable over anything else is, when I put them inside the Oculus Rift, start up the program and set the parameters to their most dominant eye; I’m asking the patient, "Are you able to see both sets of objects in Ring Runner? Are you able to see the spaceship? Are you able to see the colored arrows inside of the rings?" With my amblyopes, both eyes are on, they'll say, "Yes I can see my spaceship, yes I can see the colored arrows inside of the rings". And that is pretty phenomenal. Because when you just use a standard red, green glasses, there are a lot of techniques that we have to use to get that other eye to turn on.

Typically, in amblyopes, because they have an acuity difference or a difference in the vision of both eyes, it's very challenging for them because the brain tends to want to turn off the eye with lower acuity. So if one eye is fuzzy and one eye is clear, the brain turns off the fuzzy eye, it doesn’t want to deal with it. So we pop on the red/green glasses and the fuzzy eye will still say: "I don't want to turn on." So we have to do rapid blinking, peripheral stimulation, just a lot of extra things to get that eye to stay on. Whereas, for some reason when you put on the Oculus Rift with Vivid Vision, both eyes turn on and begin working! I've been kinda using it as an aid in my vergence procedures or procedures where I need both eyes to be on. So it's actually pretty useful with my Amblyope patients in that respect.

Cris: Is there a particular patient experience that you think is worth noting?

Amina: Yeah! I actually have a patient, she has strabismus, so strabismus is characterized by an eye turn. So it could be either inward or outward. This lady, she's in her late 30's, she's been dealing with strabismus her entire life. She's had a few surgeries that corrected the alignment of her eyes, but didn't correct binocular function. The functioning of both eyes together.

Her eyes were perfectly aligned but she was only seeing out of the dominant eye because there were no neural pathways to tell the other to stay on, or turn on or work. So she found us and we've been using Vivid Vision with her, I used it because she's commonly seeing double, she just sees double in her everyday life. We kind of like that in vision therapy because we know that both eyes are on, when you see double. The patient obviously doesn't like it, so, I went ahead a tried Vivid Vision with her and at first she saw double. She was very upset by this. She wasn't upset with me, she was just upset with herself. Like; “ aww, you know I really can't fuse this right now, or make the image one I'm only seeing double”.

So what we did was,we adjusted the horizontal parameter, so she typically has an inward eye turn, so I know that her eye is pointing in when she is seeing double. In order to get those images closer we have to add what we call prism to the program. There is a software setting that you gives you ability to add a prism. This prism forces the images closer and eventually overlaps the images. So while I'm doing this, I was able to add up to 8, of what we call ‘base out prism diopters’ to the program. As I'm slowly moving it, she's telling me everything that is going on. She’s saying, "Wow something is happening, they're getting closer (objects in the software), they seem like they're more clear, they're easier to see." And once the images fused together, she literally sat back in her chair because she couldn't handle how '3D' it was. She was almost in tears, she was saying, "This is the first time I've ever seen in 3D" and what a cool effect it was. She just wanted to touch everything she had her arms out, and she was really fully immersed. Saying things like how "Amazing it was for the first time to see in the way that you and I can see" in full 3D. Something that we take for granted, she was almost in tears. Saying "Wow I can really see in 3D!" She would physically move back while inside the program because she would say, “This is so new to me, I don't even know how to handle myself."

We didn't even use any of the protocols, we just sat with breaker which is the ‘near’ protocol in the program. I just let her look around, to let her immerse herself and really feel that her eyes were on. And she was feeling it, for sure. She said her eye was so tired but she didn't want to stop because she could see in 3D, she wanted to keep the Oculus on forever. It was really amazing. Then we switch over to the bubbles protocol and in that protocol you're required to see depth. Typically in patients with Strabismus or Amblyopia because they suppress an eye or turn off an eye, they are unable to see depth. When I had her in VR playing Bubbles, she was able to get up to difficulty two which was really surprising for me and her. She started out not being able to see any depth in the first place. She wasn’t seeing completely double, and she was very very happy. I was just floored. it was amazing. 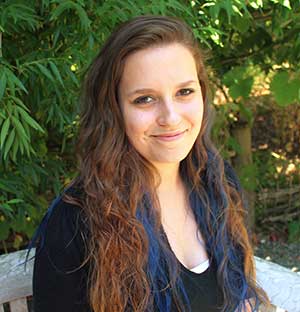